A translation of the original Persian of SIRAT-E-SULUK [the path of spiritual wayfaring) is hereby serialized. This book covers ethical and esoteric directions of spiritual perfection as well as memoirs of 'Allama Hasan Zadeh Amuli (may Allah protect and elevate his noble spirit) 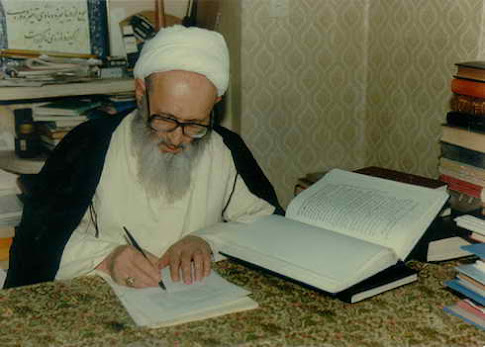 THE BEST JOY NEAR GOD AND HIS MESSENGER

At the end of the book Irshaad al-Qulub it is narrated that God asked his Messenger on the night of the spiritual ascent (mi‘iraaj):

The Messenger of Allah said: O God, I do not know.

God said: The best kind of joy is when a human being is always in the state of dhikr (remembering Allah) and does not get tired of it, he does not forget My blessings, knows Me, and throughout the night and day is after attracting My pleasure.

And the most lasting kind of life is when he is ever-vigilant of himself, until the world becomes insignificant and valueless, and the Hereafter great and valuable for him. He prefers My desire over his and is after My pleasure; and he reckons Me great the way I am. He always is cognizant of My knowledge and awareness about Him.

And at every moment of the night and day he is vigilant of My presence, when he is faced with evil and sin, and he removes from his heart whatever I do not like, and opposes Satan and his insinuations, and does not give Satan any place in his heart.

When he does the aforesaid actions, I quench his heart with a cup of My love, so that he does not give a place to anyone in his heart, and his remembrance, thought, aspiration, and speech is about those blessings that I have given to My beloved servants.

I open the eye and ear of his heart, so that he can listen through his heart and gaze at My Majesty and Greatness in amazement.

I would make the world to be narrow and small for him and the pleasures of the world insignificant and base, so that he despises them; and I would caution him against the world and what it contains in the manner that a shepherd protects his sheep from dangerous grazing areas.

This is when he escapes from the people and journeys from the transient world to the eternal universe, and hurriedly moves from the house of Satan to the dwelling pace of the All-Beneficent.; and I would beautify him with effulgence and greatness.

This is the best kind of joy and the very everlasting life; and this exalted station is for those are pleased with the desire of God.

THE EXALTED STATIONS OF THE PEOPLE OF DIVINE PLEASURE

Therefore one who takes a step towards My pleasure, I give him the privilege of three characteristics:

1-I direct him to express gratitude in such a way, that it is not admixed with any kind of ignorance

2- I beautify him with such dhikr (remembrance of Allah) that does not have any kind of forgetfulness.

3-I would make him taste such love, that he does not prefer the love of any of My servants over My love. Then when he loves Me, I likewise would love him, and I would open his eye and heart towards My Majesty. Thereafter, he would recognize My special servants, and thenceforth I would whisper to him in the darknesses of the night and day, until his conversation with others and his sittings with them is severed.

I will make him hear My speech and the speech of My angels, and I will unravel for himthe secret that I have hidden from the creation.

I will make him wear the beautiful apparel of shame and chastity, such that all My servants are ashamed of themselves, and He would move on the earth in a state of having been forgiven from all the sins.

I will fill his heart with knowledge, gnosis and insight, such that nothing from Paradise or Hell-Fire is hidden from him, and will show him the states and fearful moments of the people of the Judgment Day.

I will show him how the affluent, the poor, the ignorant, and the knowledgeable would be taken into account, and I will illuminate his grave.

Nakir and Munkir in the grave would ask him with such softness and care, that they would not witness the grief of death, the darkness of the grave and the difficulty of the journey to the Hereafter. Then I will establish the scales to weigh his deeds (mizan) and open his scroll of deeds.

I will hand him his book of deeds in his right hand so that he may read the same. Therefore I would not place any medium between Me and him, and these are the characteristics of the lovers of God.

And you O wayfarer of the path of the Friend, ponder carefully over these statements of Almighty God to his beloved, the Messenger of Allah (peace be upon him and his progeny). Reflect on the kind of invaluable presents and gifts kept for the people of self-vigiulance and Divine pleasure and love, the best of which is the opening of the vision of the heart, and it is because of its very importance, it has been mentioned twice.

The Tradition of Seeking Proximity through Supererogatory Deeds & Its Meaning:

Similar to these precious gifts are things promised for performing supererogatory and obligatory actions. Almighty God says in a sacred tradition:

The great ‘Allama, Shaykh Baha’i has brought this tradition in his book Arba’in. And he narrates from Aban bin Taghlib from Imam Baqir (peace be upon him), that he said:

When the Messenger of Allah (peace be upon him and his progeny) went to Mi’raaj, he asked Allah: O God, how do you reckon a faithful believer? He was told: O Muhammad…There is nothing that makes My servant closer to Me than performing the obligatory deeds. And thereafter, due to performing supererogatory deeds, he gets so close to me that…

Having narrated this tradition, ‘Allama Baha’I (may his spirit be sanctified) says:

The chain of narrators of this tradition is correct. It is also among the well-known traditions of the Shi’a and the Sunni, and has been mentioned in books accepted by both the sects.

Marhum Kulayni has also mentioned this tradition with two chains of narration in Usul-e-Kafi from Imam al-Sadiq (peace be upon and him) and Imam al-Baqir (peace be upon him). And thereafter he has mentioned another tradition with the same contents. This is the same proximity (qurb) which is well known by the elite (people of gnosis) as qurb-e-nawaafil (proximity attained through supererogatory deeds).

The Tradition of attaining Divine Proximity through Obligatory Deeds

Almighty God says: There is nothing that makes my servant close to Me than what I have made obligatory on him. And in performing them, My servant becomes so close to Me, that I love him. And when I love him, he becomes my hearing with which I hear, and my vision with which I see, and My hand with which I carry out work.

Hence, O wayfarer in the alley of the Friend, reflect properly on the scope of these two kinds of proximity!!

Hence the reward of obligatory acts is greater than the reward of supererogatory acts and causes more proximity as well. ‘Allama Khwaja Nasir al-Din Tusi (may his spirit be sanctified) says in this regard:

When a Gnostic detaches from himself and unites with the God, he finds every might dissolved in the might of God, which controls every might; and considers every knowledge to be annihilated and dissolved in the knowledge of God, from whose vision of knowledge not an iota is hidden; and he finds every volition immersed in His volition, under whose control nothing is excluded. Rather, he considers every entity and existential perfection to have originated from God. Hence Almighty God in this state becomes his sight through which he can see, his hearing through which he can hear, his hand with which he can perform his work, his intellect with which he can comprehend, and his existence through which he comes into existence. It is here that the Divine Gnostic has been qualified with Divine characteristics.

A Gnostic has said:

When Almighty God manifests Himself for someone, he finds the essence of all existents of the world, their attributes, and their actions to be dissolved in the Essence, Attributes, and Actions of God. He sees himself together with all the existents, such that it is as if he is their manager and controller, and it is as if he visions the entire universe as the parts of his being, and finds his essence, attributes and actions, dissolved in the reality of oneness. And when the insight of his spirit is attracted to the beauty of the Divine Essence, the light of intellect (partial intellect) turns dim and the light of the pre-eternal Essence of God shines. This is where he does not differentiate between pre-eternity (qidam) and incipience (huduth), because the Truth has come and falsehood vanished. This state is known as the state of unification (jam’); and whosoever has attained this station, links himself to everything that exists in the world of existence, for he finds every attribute, name and action in one Essence. Hence sometimes he speaks about plurality and sometimes about unity. And what we mean when we say that so and so has reached the station of unification, is this very state.

Marhum Faydh, after narrating the speech of this well-known Gnostic, says:

Perhaps this very (manifestation of the Essence of God) is the secret behind some apparently strange and alien words from Mawla Amir al-mu’minin ‘Ali (peace be upon him) in his sermon of exposition (bayan) and other sermons, for he says: